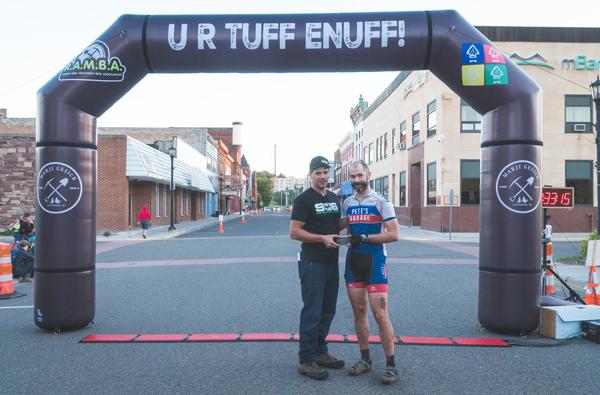 Me and some (censored) at the end of the race

Partly due to circumstance, partly due to their sadistic tendencies, the second iteration was made longer and given more elevation.  Delightful.  I had signed on mainly because I've never ridden much singletrack in Marquette aside from the South trails, and I figured a day of gorging myself on trails sounded nice.  I also signed up because a few friends, including my brother, had thrown down the gauntlet.  I'm never one to just let a gauntlet just lay there, so I signed up too.

About a week before the event, a few things happened.  First, my brother backed out due to several vague and unforseen excuses.  Second, I finally realized this was going to be a 12 hour event, making this 100-miler feel more like 175 miles. Third, I decided I was going to try to race this sucker, fitness be damned.

After loading up the trusty minivan with fellow Pete's Garage teammates Jesse and Tony, we proceeded north and arrived at registration around 7:00 Marquette time.  I've done the Ore to Shore and Noquemanon a few times, and my pre-race ritual always involves a trip to Border Grill.  Conveniently enough, Border Grill was a main sponsor of Marji Gesick and hosted registration and packet pick-up.  Midway through our burritos and beer, we were joined by Dan Torres, the owner of Border Grill.  He's a very outgoing guy with boundless energy, and his enthusiasm for Marquette, his restaurants, and the race featured prominently in our conversation.  Dan continued to make appearances throughout the weekend, helping with drop bags, race start, etc.  I've always marveled at the execution of his restaurants from the menu and appearance down to the unwavering customer service, and meeting the man behind it all helped me to understand how it comes together. 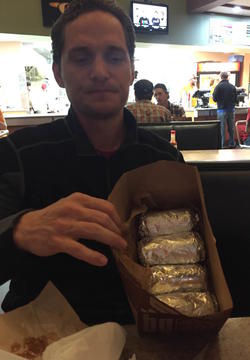 Near the end of dinner, Tony came up with the genius idea of the weekend:  Emergency burritos.  By ordering a chicken burrito, then asking it to be cut in half and triple wrapped, Tony created a portable and nearly waterproof burrito that could withstand a 100 mile event.  I put mine in my drop bag and never had to eat one, but I was comforted (I'm not kidding about this) by the knowledge that they were there.

The rest of the night involved driving one vehicle (our friend Bob had driven up separately, if you don't have a spouse/S.O. at this event two vehicles are a must) to Ishpeming and parking it near where we figured the finish would be.  Then it was back to the hotel in Marquette, one last check through equipment, and off to bed.

The main event.  After about 5 hours of sleep, it was time to get up, get breakfast, and get to the start.  My usual rule is no food 2 hours before start time, but I figured all my usual rules were thrown out the window here.  Cars were loaded, gear was triple checked, and we headed out for the Forestville trailhead.

The start atmosphere was just great.  The race involves a 1/2 mile LeMans start, and was preceded by the best version I've ever witnessed of the Star Spangled Banner.  Bottle rockets signaled the start, and we were off.  My enthusiasm lasted about 20 yards, then I was overcome by the drudgery of running.  We got a little taste of the challenges ahead when even the run ended in a sandy off-camber downhill section.

Summarizing a 12 hour race in a report like this is an impossible task.  My usual race strategy is somewhat nuanced, and involves moving myself and my bike down the trail as fast as possible until crossing the finish line.  Not wanting to change my tried and true method, I started the Marji as though it was a short track race and stayed on the gas for the first 20 miles or so.  Bob, the strong man in our group, had planned on the two of us riding together and was willing to indulge me for a time.

At about the same point that I suspected I was digging a very deep hole for myself, Bob suggested that we ease off the throttle, pointing out that the two guys we were following were local pros and might not be setting what for us would be a realistic pace.

For about another 20 miles, Bob and I continued to ride together until I told him to go on ahead.  At that point, Bob had already waited for me a couple times and had even kept quiet when I managed in a spectacularly inelegant manner to crash into him while he was riding behind me.  I realized that eventually Bob, a very nice guy, was eventually going to have to leave me for dead and ride his own race.  After I told Bob to go ahead, he proceeded to do just that at a pretty impressive clip.

Once I was alone, I focused on just enjoying the ride.  Honestly, I expected the day to turn very grim at some point but that just didn’t happen.  Despite dire warnings from Todd and Danny that we’d have no support and might have to kill animals, make fire, sleep outside, etc. that just wasn’t the case.  Volunteers were in abundance, setting up very impressive aid stations most notably at the Marquette South trailhead and at the bag drop in Negaunee, which we hit twice.  All aid stations felt like F1 pit stops, with volunteers running up to ask what I needed, apparently unable to think of anything better to do on a beautiful day than help me achieve my self-indulgent goals.  Signage along the trail was so good that my Garmin served only as backup, reassuring me in my haze that I was still on track.

The trails were spectacular, and the race was transformative.  I’ve ridden decent singletrack in the Midwest, but I’ve never been a fan of really technical stuff.  The Marji felt like a one-day desensitization course for my fear of rocks, roots, and drops.  The progression of the trails felt slow and steady, starting us off relatively easy in Marquette and graduating up to nastier stuff in Negaunee and Ishpeming.  By the end of the day, I was bombing stuff I never would have tried if someone had just put me at the top of a hill and said “Ride this”.  True, some of the day was spent blaming Todd and blaming Danny and even blaming Lyle, whoever that is, but a good part of it was spent smiling and appreciating the great trails, volunteers, and promoters.

My race plan, if I ever had one, was to do some mental calculations at the first bag drop at mile 70 to see if I really had a shot at a buckle (sub-12 hours). By that point I was hoping to be solidly out of contention so I could just soft-pedal from there on in.  Sadly, my math told me I might still have a shot, but only if I stayed on the gas.  The next 20 miles took us over every geologic feature in Negaunee and Ishpeming, including mine tailings and even past some of the old mining equipment itself.  The trails were really great, but also really slow.

When I came back through the bag drop at mile 90, I was convinced that a buckle was no longer an option.  I didn’t really care;  10 hours of riding has a way of adjusting your goals and expectations, and finishing would be a big accomplishment in and of itself.  I took a little more time, lubed my chain, and embarked on the last 15 miles.

About a mile outside the aid station, I was again checking my math and figured I had about 2 hours until sunset (7:40).  If the terrain I was facing was anything like what I had just covered, no way could I make a 7.5 mph average and finish before dark.  Only then did I realize that I forgot to get my stupid light out of my stupid drop bag.  Turning around didn’t appeal to me, so my new goal was to finish before sundown.

As the shadows got longer, my anxiety increased.  I kept convincing myself that each rise in the trail must have been Jasper Knob, and that the finish lay just beyond, despite what my Garmin was telling me as well as the fact that I had only collected 3 out of the 4 poker chips at checkpoints along the way.  Finally, I dumped out onto Jasper road, climbed Jasper knob, got my stupid poker chip, and bombed down to the finish.

Bob was waiting for me with his buckle, and waited around until I collected mine.  Next came the race to get changed, the race to get pizza, the race to get a beer, and the wait for Jesse and Tony.  We didn’t have to wait long before they finished, both wearing big smiles.  Then we headed back to the hotel, tried to get some sleep (hopeless), and on Sunday we got up, loaded the van, hit Beef-a-Roo, and tried to put ourselves back together into some semblance of the dads and husbands we had been just 48 hours before.

Amazingly, out of the four of us there hadn’t been a single flat, mechanical, bonk, or wrong turn the whole day.  I told myself at the finish that this would be "one and done", but I'm already thinking about next year.  Todd and Danny have created something really special and really big up there in the U.P., and it's going to catch on.  This will be our Leadville, and will be yet another reason for riders all over the country to discover the North Coast chasing fame and belt buckles. 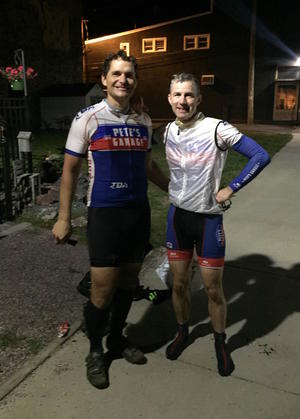 Tony and Jesse at the finish

I left all of my race prep until the last week, which I wouldn't recommend.  This is, after all, an Ironman-type effort and should be approached with the same type of preparation.  Just in case you're a procrastinator like me, here are my notes which you're free to steal.  After all, I stole most of the ideas myself from Matt Aacker's blog.

Pretty much anything goes in this category, as long as it tastes decent. 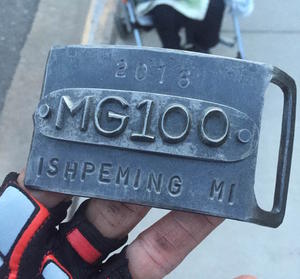